Organized Crime: 60% of Cryptocurrency Hacks Carried Out By 2 Groups

According to a new report by Chainalysis, 60 percent of cryptocurrency hacks (over $1 billion) were carried out by just two professional groups.

Cryptocurrency Hacks Are a Centralized Affair

If you were already disgruntled by claims of market manipulation and centralized mining, you really won’t like this. Even hackers are no longer bedroom operations lead by tweens in hoodies. They are meticulously planned and carefully thought out down to the flawless laundering of funds.

Chainalysis reports that two prominent professional groups (whom they label Alpha and Beta) are together responsible for at least 60 percent of all hacks from exchanges and custodial services. 60 percent.

Forget about the loan computer scientist hacking his way into a system in his free time for kicks. This is organized, centralized crime.

The Beta group, according to the report, is in it for personal gain. However, Alpha’s goals are more disturbing beyond merely getting rich. The report omits to say what these goals are. But leaves one’s imagination running wild over the sinister plans of these powerful people: financing terrorism, trafficking humans, bringing down the Bitcoin network.

Since both groups are “professional,” they go to extraordinary lengths to cover their tracks and launder the money they steal. They mainly accomplish this by moving the funds around through a web of wallets and through tactics such as crypto dusting and crypto mixers.

Crypto dusting is like email spam, except on the blockchain. It spams multiple wallets with a small amount of tainted cash, thereby eroding the recipients’ reputation. Crypto mixing, on the other hand, changes tainted tokens for fresh ones, essentially cleaning crypto through exchanges.

According to The Wall Street Journal, one hack by Alpha was followed by 15,000 transfers incredibly quickly after the money was stolen–turning crypto into cash within 30 days of its theft. Beta, on the other hand, tends to HODL its stolen crypto sometimes for over a year before selling and cashing out. 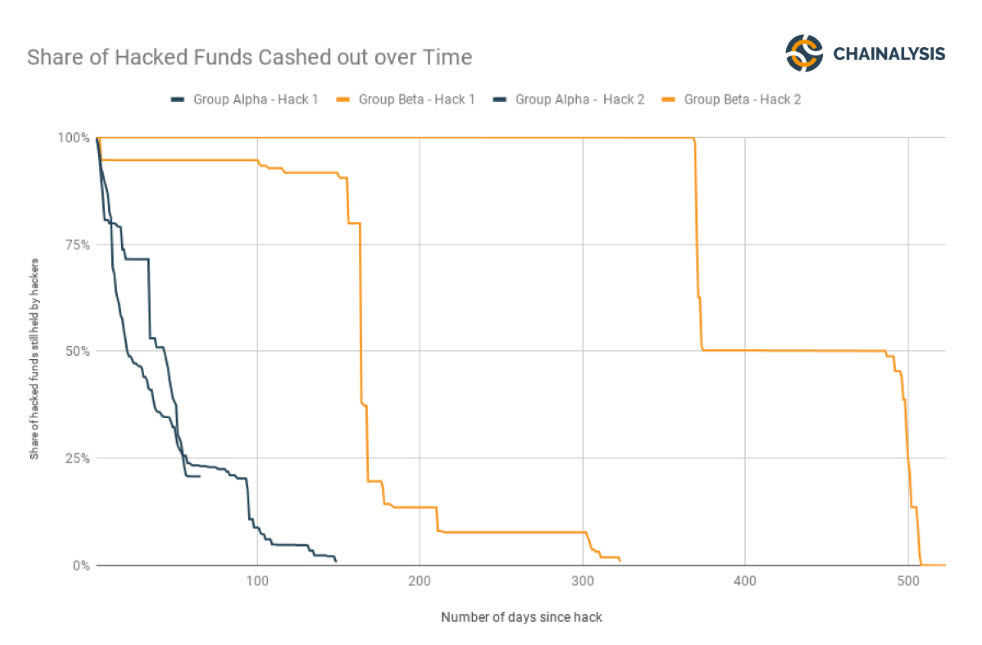 The Report Could Be Wrong

Global Trend Against Cash Intensifies as China Joins the Squeeze

Chainalysis admits in the report that their findings may be wrong. However, as an internationally acclaimed research firm with government contracts, it still leaves bitcoin users with a stale taste in their mouth. And flags up many questions, including just how controlled the whole network is after all.

If two groups are responsible for stealing over $1 billion of cryptocurrencies, could they be capable of even more sinister deeds, such as a 51% attack on the network?

It’s generally concluded that a 51% attack on the bitcoin network is extremely unlikely since the cost would outweigh the benefit. However, if the goal of the perpetrator goes way beyond money, all bets may be off.

Do you think chainalysis is correct? Share your thoughts below!

The post Organized Crime: 60% of Cryptocurrency Hacks Carried Out By 2 Groups appeared first on Bitcoinist.com.

Deducting Crypto Losses to Get a Tax Refund May Be Challenging, Accountant Says