The Tron Foundation Founder & CEO Justin Sun is in San Francisco, United States, despite rumours of him being placed under a Chinese exit ban.

The blockchain entrepreneur published a live Periscope video Tuesday afternoon. He took the viewers on a tour of his surroundings, with San Francisco’s famous Bay Bridge appearing in and of the frame. That proved that Sun was not in China, as Chinese media service Caixin reported earlier.

The whereabouts of Sun became a trending topic in the cryptocurrency community soon after local news sources claimed he was facing border control by the Chinese police. Reports emerged that a select committee on internet safety had charged Sun on the accounts of money laundering, unregulated gambling, illegal fundraising, and spreading pornographic content. It was also said that the committee suggested the police to arrest Sun should the necessity arises.

Caixin confirms our thought as Justin Sun @justinsuntron is now under investigation and cannot leave China.

The news appeared hours after the Tron Foundation tweeted about Sun postponing his lunch with Warren Buffett. The firm cited medical reasons, stating that Sun was suffering from kidney stones and, therefore, was unable to meet the Berkshire Hathaway CEO. Nevertheless, independent Chinese sources claimed that Sun was lying about his health to coverup the police investigation.

The Tron CEO, on the other hand, appeared relaxed in his San Francisco hotel. He discussed the ongoing Tron developments with the community, never giving too much attention to the current “FUD,” a backronym for fear, uncertainty, and doubt.

Sun will meet Buffett on July 25, as indicated by the Tron Foundation’s tweet published late yesterday.

TRX Bulls Back on Track

Hours before after Sun’s Periscope video from San Francisco went ‘LIVE,’ the Tron market started recovering from the day-long bloodbath.

As of 18:55 UTC, the TRX/USD instrument had surged by more than 15 percent to 0.0252. Earlier today, the pair established a session low of 0.0218, with many analysts predicting a much smaller downside target as the FUD picked momentum. Sun’s video acted as a much-needed breather for an otherwise suffocating Tron market. 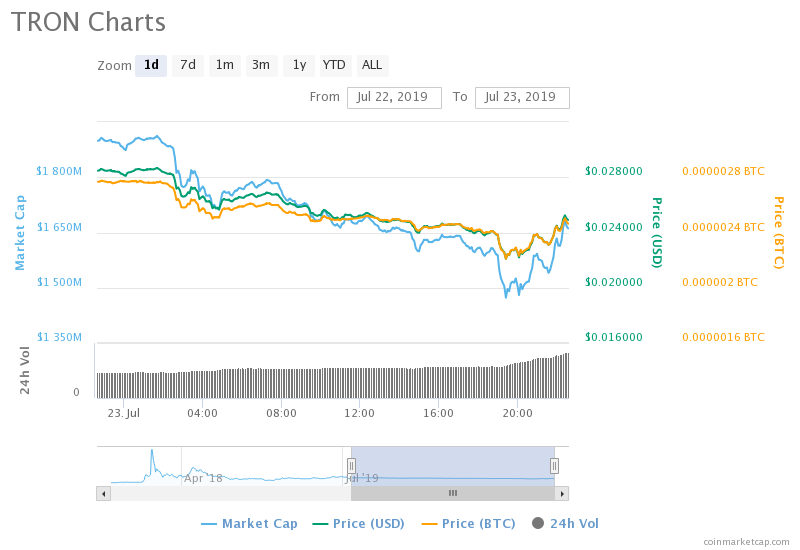 How to Encrypt Messages With PGP When Using Darknet Markets

The upside move, nevertheless, did not take Tron entirely out of its intraday bearish bias. Data on CoinMarketCap.com showed the asset still trending 12.72 percent lower than where it was 24 hours ago. The TRX/USD pair could see gains as the lunch-date between Sun and Buffett grows near.

Even though Sun escaped the trolls today, his return back to mainland China would see him facing the police investigation, as discussed above.

Bay bridge is beautiful. Me and our comms guy AKA bodyguard. #TRON pic.twitter.com/ujj2FEkN3K

On the other hand, there are still theories about Sun faking the live footage from San Francisco, saying that it as an old recording. Bitcoinist will continue monitoring that angle as well.

Holders of the Digital Yuan Will Not Be Paid Interest